Yes folks, step right up. What does “priority” mean to you?

Please review https://www.redbacksweb.com/?p=236 where I initially voiced my concerns about how lousy their treatment of us has been in this particular instance. Let me be perfectly clear: as long as everything runs smoothly, there are no issues. But as soon as one thing breaks, their staff simply cannot cope, and the concept of providing service to their customers is totally lost on them.

One call center person put me on hold for over 15 minutes.  If she thinks she’s doing a good job, she’s very sadly mistaken.

Another transferred my call to an area where I had already told her that I did not wish the call to be taken. Yes, I have names. I have requested yet another callback, but when they fail to make that call to me, I will speak with somebody there who can pull their teeth out.

Now, here is the actual problem piece of luggage.

Well, no, the luggage is fine. The issue is that United simply failed to transfer this item onto our DFW flight, despite promising that they would do so. Certainly, it’s tagged to go to DFW. They just didn’t do their job. 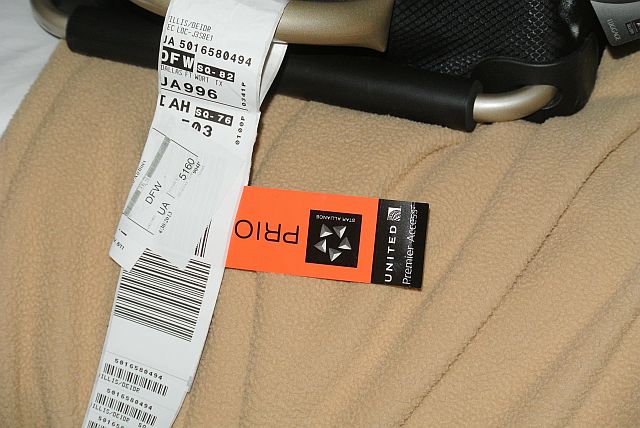 Also observe that has been very clearly tagged as “priority”.

United didn’t simply fail to transfer this item onto our DFW flight at Houston, but they then

– tried to tell us that this was luggage that we initially checked at the check-in counter, and the clerk then argued with us over this point. The person in question was not there when the item was checked – at the gate – and continued to argue with me despite being told to shut up by her colleague working alongside her. And then she denied she was arguing!

– Failed to call us – as they had promised they would – if the piece of luggage was not on the next available flight out of Houston. It was not. And they did not.

– This item, finally arrived in Dallas around midnight. Some seven hours after we had arrived. Is that priority? No way in hell!

But it gets worse. At that time of day, it would take less than thirty minutes to travel from DFW airport to our hotel. Despite this rather short travel distance, this item of luggage was not delivered to our hotel until 3:25am. What in the world were they using as the delivery mechanism? Horse and carriage?

Rest assured that this is not the last of this; I refuse to accept this sort of crappy, piss-poor excuse for service from anyone, least of all United. And if United believes that today is the day that I should start accepting this sort of rubbish, they need to think again.

And no, they’ve not yet responded to any of my tweets about this disgusting performance on their part.