I recently purchased a brand new Microsoft Surface RT. This was the original Surface, 64GB. The price was very good; the deal seemed to be too good to resist – 64GB Surface, with keyboard, for less than the asking price for a 32GB Surface, without a keyboard.

I went in to the deal with my eyes open: I knew that the OS is a somewhat brain-dead OS, but that’s also true of the iPad. When you look at both devices, they’re both essentially designed to consume data rather than create it.

But the Surface seemed to have a couple of possible advantages: the OS is derived from Windows, and with an included keyboard, I felt that there might be some potential.

Looking at the overall package, I also felt that there might be an opportunity for writing some software for the (radio) station. Within the station we have very little in the way of available funds, but knowing both software development and the station’s needs, there seemed to me the possibility of doing something for the station, plus learning more about the Windows RT ecosystem.

But as I write this, I’m about 19 days into my ownership of the device, which has now spent more time in an unserviceable state than it has in an operational state.

While I accept that it’s fair that occasionally a device might fail early in its life, the way that the matter has been handle by its maker has been nothing short of the most astounding serious of misinformation, failures and bungles that I have seen in a long time.

When the device initially failed, I was somewhat disheartened. Nobody likes to see anything that they’ve just bought fail within a few days of purchase. My initial thoughts were that I should just take it back to the store where I bought it from, and have it replaced.

But I tweeted about this, and received what seemed to be a very positive response from Microsoft’s Social media support team for the product. 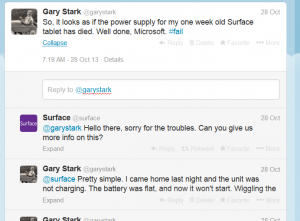 And lodging the requested service request also seemed to be a positive choice, suggesting that there would be a very prompt turnaround …

You then go on and order a courier pick-up – again indicating that the whole process will be completed promptly –  and so I went down this path.

Talk about a stupid mistake on my part. But how was I to know? Microsoft offered less than zero transparency about the process, and no visibility whatsoever about the timeline involved.

For instance, when confirming the courier details, Microsoft tell you that the courier’s hours for collection lie between 9am and 5pm.

But nobody had bothered to confirm that with the couriers, it seems: the courier called to collect the device at 8:30 am on the appointed day. And then the driver berated me because I wasn’t there when he wanted me there.

But that’s where the fun – as in dysfunction – really began.

To where was the courier taking the device? Microsoft at North Ryde?

Perhaps a Microsoft service centre; I believe that there’s one in Harris Park in Sydbey’s west?

Try UPS, in Botany. Yes, that’s right, they were couriering the device … to another courier!

What the hell is this all about? Once it arrived at UPS, it sat, somewhere (the Black Hole Of Botany) for two days, before it finally showed up in a Microsoft service centre.

Somewhere. I’ve not been told where, but I’m led to believe that it is in Sydney.

So, two days, to get from Sydney … to Sydney.

Then, Microsoft’s email tells me that they’ve (a) received the device, and (b) they will dispatch the replacement device in two days’ time. So much for “When your device is received …”.

So, that’s a total of four days minimum when they’ve done fuck all in this matter.

And the current word is that I might receive it back … tomorrow.

All this, when the correct action, and the correct advice from Microsoft, should have been to just take it back to the dealer from whom I bought it, and exchanged it as a DOA unit.

I am totally beyond livid at the way that Microsoft has handled this matter. It’s been a fuck up after fuck up after fuck up, starting with misinformation, passing through the Black Hole of Botany, and just no hope whatsoever in terms of what the hell customer service should be all about.

And even a fairly senior customer liaison person within Microsoft, who has been trying very hard to make things happen, has simply been unable to impress upon those people within the organisation just how badly they’ve screwed up in this matter.

So, we now have yet another reason for why the Syurface RT has failed as a device: it’s not only an unreliable device, but Microosoft’s people simply do not have the technical and administrative competence to help customers when the device fails.